We make the rules 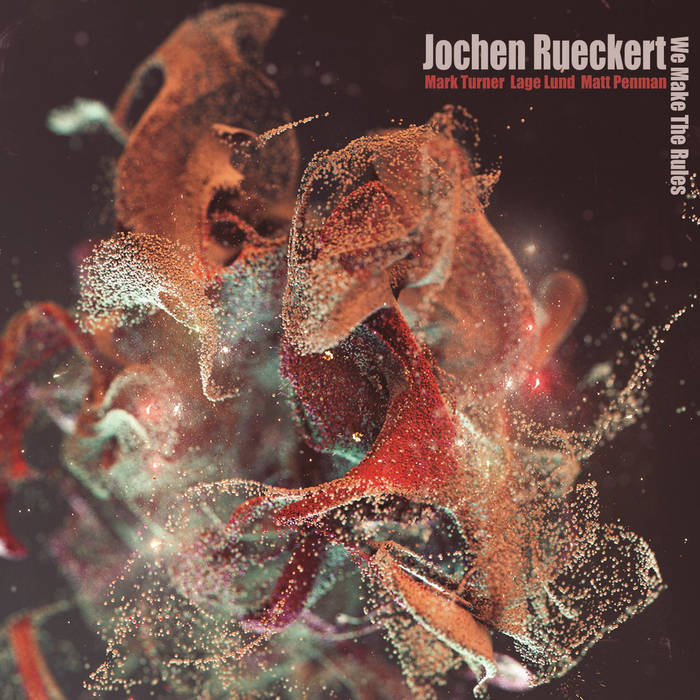 Mauritz Gullbransson Huge sound, drums and upright bass sounds incredible. Like a super hi-def live recording. On top of that, the improvisation and interplay is, as usual, astonishing. Favorite track: Eggshells.

Charts for all sogns off this album are available here: www.jochenrueckert.net#lead-sheets

We Make The Rules is the debut Whirlwind release from the multifaceted drummer & composer Jochen Rueckert, a German native who's been based in NYC since 1995, where he's become one of the preeminent artists of his generation known for his work with Marc Copland, Kurt Rosenwinkel, Nils Wogram's Root 70, Sam Yahel, Will Vinson and Seamus Blake. He's also renowned for his work in electronic music under the alias "Wolff Parkinson White" as well as his long running book series "Read the Rueckert- travel observations and pictures of hotel rooms".

The album features Rueckert's quartet, a stellar cast of players which has been together since 2009, featuring long standing musical cohorts Mark Turner on tenor saxophone, Lage Lund on guitar and Matt Penman on double bass; all three guiding lights of their generation. Rueckert explains, "I've known Mark for about 18 years, I've played in his band occasionally and also got to know him while playing in Kurt Rosenwinkel's band. He's my favorite tenor player and I used to be at Smalls Jazz Club every Tuesday when he would play in Kurt's famed group when I first got to NYC in the 90s. Lage I've known for 10 years and I love both his tone and the harmonic flow he brings to my songs. We've played together a lot, especially in alto saxophonist Will Vinson's band. Matt is the first great bass player I ever played with and it was an eye-opener. We've known each other for over 20 years and were roommates for about four years. We have been playing in Nils Wogram's band 'Root 70' for over a decade and in Sam Yahel's trio for about 10 years. Playing with him is like riding a bicycle."

This group cohesion is immediately apparent on We Make The Rules, which features all original music that was written by Rueckert around 2011 and subsequently toured internationally before going into the studio to record. "I'm getting a little allergic to 'project style recordings', where you play music in the studio without being able to fine tune it on the road," Rueckert adds. "All said and done, the music on the album was recorded in only seven hours and six of the tracks are first takes, the rest second takes. The perks of having a working band!" The album features a standout sound quality, the result of post production work carried out by one of NY's all-time sonic gurus James Farber.

Compositionally, the music was conceived with each of his band members in mind and covers a lot of ground while featuring the use of Rueckert's penchant for writing understated melodies. 'Yellow Bottoms', for example, is reminiscent of early 60s compositions by Wayne Shorter or Herbie Hancock, who are among Jochen's favorite influences. Drawing from the compositional styles of his peers Hayden Chisholm and Nils Wogram, who churn motives and rhythms around while adding a lot of contrast throughout a song's sections, 'Pretty From Afar' implores these devices by starting out anthemic, then dissolves, picking up again just to ultimately peter out in the last section which ends softly with almost a sense of despair or disappointment. Other influences can be pinpointed to Rueckert's formative years in the 1990s: Kurt Rosenwinkel, Mark Turner and Reid Anderson; there are even hints of 1900s classical music and a quote from a Deftones song on 'Saul Goodman'. Rueckert's experiences working in the bands of other musicians come into play as well: "I get frustrated as a sideman when I have to read overly complicated forms, or when the solo sections are then simplified or some separate thing. I purposefully wrote most of the music so that the solos are on the actual forms of the songs, making them more of a complete and cohesive piece. I also tried to not shy away from having a fair amount of swingers which I really miss on many recent albums."

As much as the songs on the album were written as vehicles for his bandmates to take on improvisational flight (and in that capacity they shine brilliantly), they were also inspired by Jochen's life experiences. As he explains: "'Alloplasty' is meant in the psychoanalytic way, not the surgery. I am plagued by intense fear of flying and it's one of the things that comes up in therapy. 'Pretty From Afar' is about a girl I saw once in Helsinki at a gig. The band was watching her throughout the set in the back of the club, intrigued. We were all talking about her but later she came up to us and was ugly as sin. 'Manong Twilight At The Whatever Hotel' is named after a piece of art by my uncle Carlos Villa from San Fransisco. He was an enthusiastic jazz fan and saw everybody play in the 60s. He passed away when I was writing that tune."

One of Jochen's catch phrases is the ability to "have many moods to choose from" and as a composer he succeeds greatly at presenting an album that reflects this notion as well as tackling the bigger challenges of coalescing concepts and feelings with instrumental music.

"Rückert has a love for subtle melodies in his pieces and his bandmates have, through many tours, tailored them into many moods, giving the album a truly live feel."
Jazz Podium

"With each new piece, a world opens."
Concerto Magazine

"Possibly only someone like Billy Hart can succeed at channeling the enormous force of such a band as discreetly and effectively as Rueckert. In this setting of unlimited freedom of movement and empathy, Mark Turner's shimmering sound, weaved into a spiderweb of Lund's lines, even works a tad better. In between, Rueckert stays constant: a magician of moods, whose rules should absolutely be common knowledge."
Jazzthetik Magazine

"Besides a fascinating technique, this exceptional drummer also has an uncannily refined sound and a distinct sense of instrumentation and dynamics, something no one will match anytime soon. This is much more than just a fascinating album - virtually time and genre-less - you should definitely hear this, and, if you're a drummer, you should pay very close attention. Must have."
Drums and Percussion

"Jochen Rueckert has created a mesmerizing collection of songs - real songs, not just riffs to "blow over" - that get lodged in your mind. You'll want to explore these musical trails time and again."
Step Tempest

"The musicianship is excellent."
UK Vibe

"A thoughtful, cohesive and rather sensitive session."
The Northern Echo

"There is a melodic sensibility to this album that is positively magnetic... Just outstanding. Highly Recommended."
Wondering Sound

"This is music that's contemporary - in the best sense of the word. The guys play with a technique that isn't misused, a technique that stays true to tradition yet still reaches out to the unknown."
Bebop Spoken Here

"We Make The Rules is a highly sophisticated album that contains some excellent ensemble and individual playing, one would hardly expect any less from this stellar group of musicians."
The Jazz Mann

“At first listen, the music is subtle, gentle and more and more it reveals the artful cooperation of all. This music does not impose itself and is amazingly beautiful. An excellent quartet.”
Leipzig Volkszeitung

“There is a deep mutual understanding that the four luminaries share.”
Jazz thing

“The whole thing swings unobtrusively, full of virtuosity without anything to prove to anyone.”
Freie Presse Daily

"This is music that's contemporary - in the best sense of the word."
Bebop Spoken Here

​"An absolute delight, and without a dull moment, We Make The Rules gets my highest recommendation... Rueckert generates a tremendous amount of energy with a fairly light touch, but with great musical sense in a constantly varying flow of timbre and accent. He shapes his tunes to fit his drumming style, and it suits an inventive stylist like Mark Turner like a well-tailored suit."​
Stuart Kremsky

Jochen is a jazz drumming German expat living in NYC. His deliberate avoidance of formal music education, albeit initially for budgetary reasons, provides a great lack of erudite nonsense in his writing. Jochen is mostly known for his work in 12 years of the Marc Copland trio, the mid-2000 Kurt Rosenwinkel New Quartet, all of Nils Wogram's Root 70, and recent work with the Melissa Aldana trio ... more

Bandcamp Daily  your guide to the world of Bandcamp